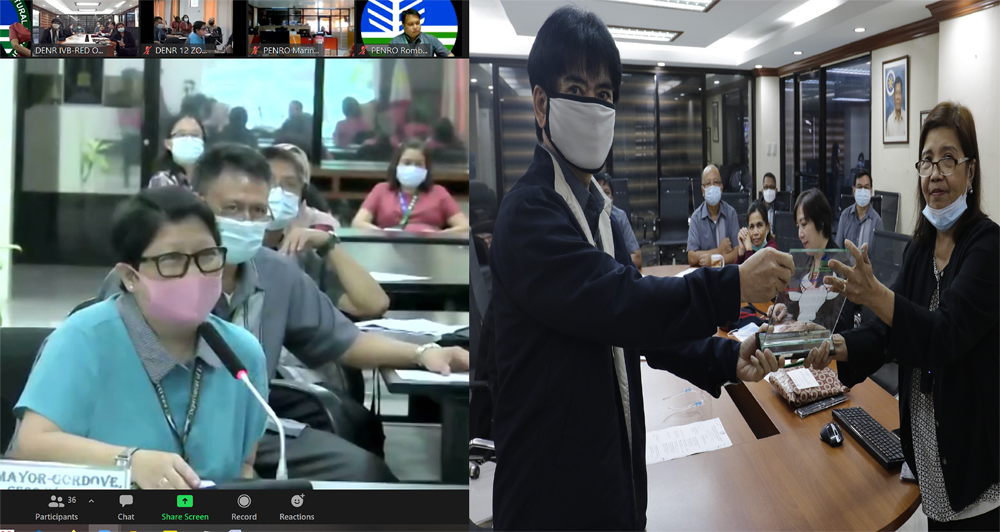 The Department of Environment and Natural Resources  - MIMAROPA Region welcomed Assistant Regional Director Donna Mayor- Gordove as the new head of Management Services pursuant to DENR Special Order No. 22, which was signed by Secretary Roy Cimatu on January 26, 2021.

In a simple turnover ceremony held via Zoom on February 9, 2021, Regional Executive Director Maria Lourdes G. Ferrer extended her greetings to the incoming director, who was in Region XII during the online meet.

“We are trying to do some changes now and we wish to continue that while working with you,” said RED Ferrer, who was at the MIMAROPA’s Regional Office in Manila on the other hand.

ARD Gordove hailed from Lipa City, Batangas. She finished Bachelor of Science in Commerce, major in Management of Financial Institutions at the De La Salle University in 1986, and completed her Master’s Degree in Urban and Regional Planning at the University of the Philippines in 1997.

She has worked at the private sector for almost a decade before joining the government in 1993 through the Bondoc Development Project. She then worked as Supervising Project Development Officer at the Department of Transportation and Communication from January 1995 to April 2000.

She transferred to the Development Academy of the Philippines as Project Officer, and then served as Director I at the Housing and Urban Development Council from January 2002 to March of 2005.

Finally in April 2005, she was appointed Director III at the Department of Environment and Natural Resources where she got fully equipped with management and technical skills, and more experiences honed to be a good leader and decision maker. Prior to her transfer to DENR MIMAROPA, she was ARD for Management Services in  Region XII.

Meanwhile, DENR MIMAROPA awarded a plaque of appreciation to outgoing ARD Bighani Manipula in recognition of his hard work and leadership as head of the of DENR MIMAROPA as head of its Management Services for the period July 2019 – February 2021.

ARD Manipula was reassigned in the same position at DENR Region XII.

Officials and employees from the field offices of MIMAROPA and Region XII were also present to witness the ceremonial turnover online. ###