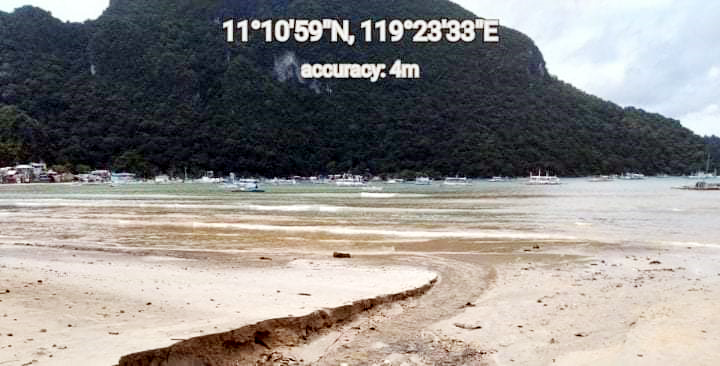 The Department of Environment and Natural Resources in MIMAROPA Region is set to conduct further investigation to determine if sewage water from nearby establishments also drain to an outfall that recently discharged black water into Bacuit Bay in El Nido, Palawan.

From an initial joint report by the region’s Environmental Management Bureau and El Nido Protected Area Management Office, Brgy. Masagana Chairman Edilberto Templado confirmed that the discharged water was due to his directive to clear the outfall so that rainwater would drain into the sea and prevent flooding in the village.

He explained that the outfall drains the water coming from the nearby mountains and those that pass through the national highway, Tabanca Road and some portions of Brgy. Maligaya.  During high tide, however, sands build up and block the outfall, causing water to settle and eventually flood the village especially during typhoons.

Templado said he ordered the waterway to be cleared to prevent the town from being inundated by the other night’s rainfall. The channel opened and eventually flushed out the stagnant, black water seen in Bacuit Bay on October 22.  He maintained that what flowed from the outfall was not sewage water as most establishments in the area are still not operational.

Nevertheless, the DENR is already taking actions to make sure that the said waterway does not release dirty water into the bay.

“We have taken water samples for testing and we will also conduct tracing to determine if there are commercial establishments that drain their wastewater into that outfall,” said EMB MIMAROPA Regional Director Michael Drake Matias.

The water samples are tested for Fecal Coliform, Total Suspended Solids, Dissolved Oxygen, Nitrate, Phosphate, pH, Color and Temperature. As of press time, the DENR and EMB are still waiting for the results of the tests.

Besides these initiatives, RD Matias said the subject outfall shall likewise be included in stations regularly monitored, such as Cabugao, El Nido Estero, Masagana and Corong-corong.

These outfalls from four priority barangays, namely Buena Suerte, Maligaya, Masagana and Corong-corong are under strict monitoring as part of the government's efforts to rehabilitate El Nido's Bacuit Bay, portions of which were found polluted due to the discharge of untreated wastewater by several commercial establishments.

“We cannot afford to have another outfall that would degrade the water quality of Bacuit Bay, especially now that El Nido is slowly re-opening for tourism,” expressed DENR MIMAROPA Regional Executive Director Maria Lourdes Ferrer.

“Just like before, we bank on our partnership with the LGU, the business sector, and the community, to prevent any form of destruction in our environment, and completely restore the beautiful island of El Nido,” the director concluded. ###