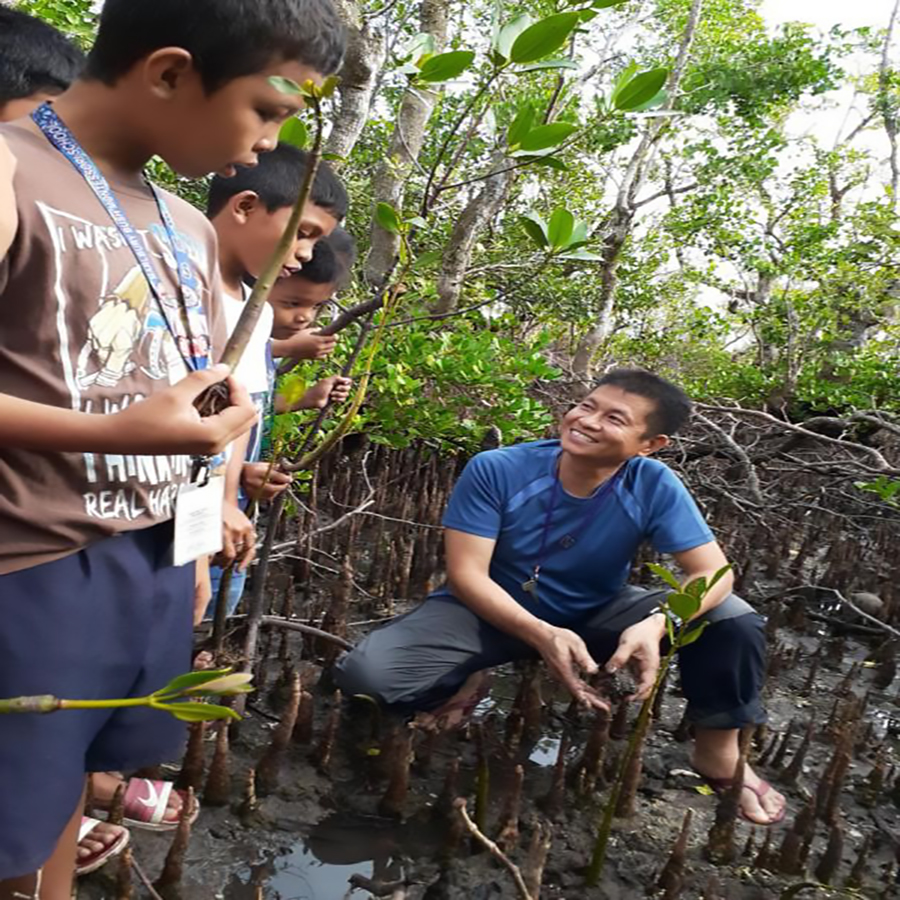 The Department of Environment and Natural Resources in MIMAROPA Region held on February 18, simultaneous coastal and river cleanup and mangrove planting activities to celebrate the 24th anniversary of Mt. Guiting-guiting Natural Park (MGGNP) as a protected area by virtue of Presidential Proclamation No. 746.

Located in Sibuyan Island in Romblon, Mt. Guiting-guiting boasts of a rich biodiversity, dense forest cover, and natural water system that provide and sustain life in the three municipalities that cover the great mountain range, namely, Magdiwang, Cajidiocan and San Fernando. Hence, the DENR and the local government units prepared series of activities for the whole month of February to allow the communities to recognize the value and somehow give back to Mt. Guiting-guiting.

“By planting mangroves, we enrich Sibuyan’s mangrove forest reserve. By cleaning up rivers and seas, we free the wetlands and bodies of water around it from trash,”  Protected Area Superintendent Malvin Rocero said during the mangrove planting activity in Brgy. Cambalo in Cajidiocan.

During the program, Rocero also explained the value of mangroves that serve as breeding ground for diverse life forms; and as the first line of defense against the danger brought by storm surges and tsunamis.

Meanwhile, Romblon’s Provincial Environment and Natural Resources Officer Maximo Landrito noted that the slated activities were fitting not only for Mt. Guiting-guiting Day but also for World Wetlands Day which was commemorated last February 2.

“Part of the marching orders of Secretary Roy Cimatu this year is to promote clean water, enhanced biodiversity conservation and strengthened solid waste management. We observe significant celebrations like these to mobilize people as our partners in protecting the environment so that our children, and the next generations to come would still be able to savor the gifts of Mt. Guiting-guiting and the rest of what nature can offer,” Landrito remarked.

A total of 200 mangrove propagules were planted on that day; and truckloads of trash, mostly disposable or made of plastic, were collected by an estimate of 800 volunteers from around the three towns in Sibuyan island.

Streamlining the adoption of Tayo Ang Kalikasan (TAK), RPAO also introduced to the students and to Principal Jomer Martinez, the concept of TAK as DENR’s campaign to intensify the collaboration of the government and the community in upholding the welfare of the environment. RPAO further explained DENR MIMAROPA’s banner program for TAK, which is saying no to single-use plastics, such as straw, stirrer, plastic or disposable utensils, cups and containers.

Mr. Martinez and the students accepted the challenge to be part of the solution against plastic pollution by using water tumblers instead of buying plastic-wrapped “ice-tubig,” for their drinks.

Before the program ended, students of ANHS also made their own hugot-lines based on what they have learned from the discussions. The winner of the best hugot-line belted out a humorous but environment-focused piece. “Mangrove ka ba?” “Bakit?” “Kasi, ikaw ang nagbibigay proteksyon para maging matatag ako!”

“We at the DENR MIMAROPA, are glad to know that through various IEC activities and environmental celebrations, we have inspired among our people, particularly in Romblon, a deeper understanding of their role in protecting and taking of care of Mother Nature,” Regional Executive Director Henry Adornado remarked.

“We will always be to thankful to you because we know that we have our partners in making sure that we bequeath a healthy and clean environment to our children and the generations to come,” he concluded.###