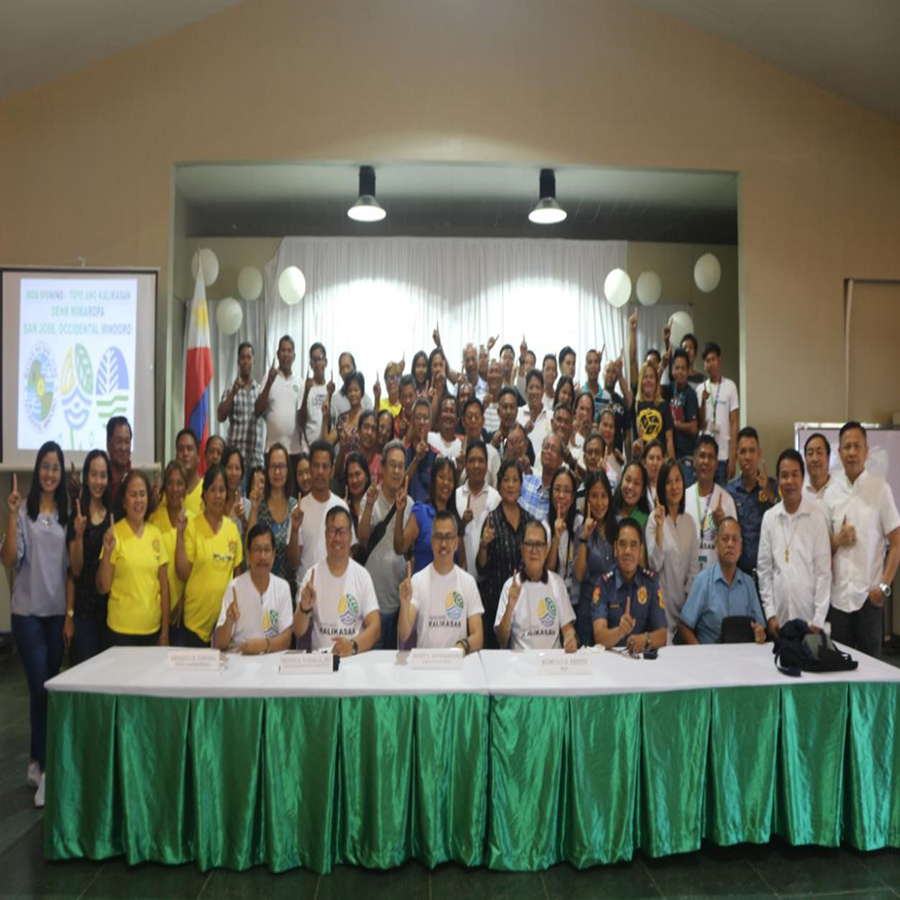 The Department of Environment and Natural Resources - MIMAROPA Region, and the local government unit of San Jose in Occidental Mindoro joined forces to intensify environment protection efforts through a MOA-signing activity establishing the municipality as a local chapter of Tayo Ang Kalikasan (TAK) at Seasons Hotel, January 10.

As local chapter of TAK, San Jose shall strengthen through an ordinance it previously issued, waste segregation at source and prohibition of disposable or single-use plastics, such as plastic bags, utensils, cups, straws, and stirrers. These steps aim to reduce the volume of plastic wastes that eventually pollute portions of the town’s treasured bodies of water, the Mangarin Bay and Pandurucan River.

Data from river and coastal cleanup drives held in March (World Water Day) and September (International Coastal Cleanup) last year revealed that  plastics and plastic debris were still among the top wastes collected in Mangarin and Pandurucan. These do not include the plastic wastes in the 24-25 tons of trash generated by the town everyday.

It is envisioned that as TAK chapter, San Jose would be able to prevent degradation of the environment caused by plastic pollution.

TAK is the DENR’s campaign that engages communities as partners in addressing environmental issues and challenges. El Nido in Palawan and Puerto Galera in Oriental Mindoro were also launched as TAK local chapters to improve solid waste management amid the islands’ ongoing rehabilitation.

“We are often reminded by Secretary Roy Cimatu that environment protection is not only the duty of the DENR or the LGU. It is everybody’s responsibility to take care of nature,” DENR MIMAROPA Regional Executive Director Henry Adornado stated.

On its way to recovery after being devastated by Typhoon Ursula, San Jose, led by Mayor Romulo Festin, welcomed such endeavor and showed its support by gathering close to 130 residents and leaders of barangays, partner agencies, the academe and non-government organizations in the capacity building and stakeholders forum held after the MOA signing.

During the workshop, the DENR and EMB MIMAROPA presented  major environmental problems--other than solids wastes--that beset the historical municipality of San Jose: the failing water quality of Mangarin Bay and Pandurucan River; and violation of easement zones.

Based on water samples tested for fecal coliform, some portions of Mangarin Bay exceeded the allowable standard of 100 Most Probable Number (MPN) for Class SB waters (Department Administrative Order 2016-08).

And while Pandurucan shall still be subjected to coliform test this year, its heavily silted and foul smelling water, not to mention the presence of informal settlers and pig pens that discharge wastes directly into the river, suggests it does not meet its classification according to its beneficial use. Pandurucan River is Class B, which means it is intended for primary contact recreation such as bathing and swimming.

“Perhaps some people may be able to tolerate the water. But considering the evident state of the river, those who are swimming or bathing in it are putting themselves at high risk,” Provincial Environment and Management Officer Alexander Coden explained.

Besides water pollution, the DENR and the LGU also identified the presence of commercial and residential establishments encroaching easement zones, violating the Water Code of the Philippines which prohibits occupation of river banks, sea shores and lakes within a zone of three meters in urban areas, 20 meters in alienable and disposable (A&D) land; and 40 meters in forest areas.

“We found illegal structures in Brgys. Caminawit, San Roque, Bubog, Poblacion III, Poblacion IV, Pag-asa and Bagong Sikat. There is a clear violation of the law that needs to be corrected in order for us to restore the environment,” CENRO Efren Delos Reyes of San Jose remarked.

For its part, the LGU has taken initial steps to clear the easement zones. It has started demolition of eight restaurants and bars built along the 20-meter easement in Brgy. San Roque. As of this writing, two more establishments are up for demolition this week.

The DENR is also set to finalize inventory of households and businesses occupying the buffer zones, which shall then be issued with corresponding notices to vacate. Should the occupants fail to demolish their structures or vacate the area, they shall be recommended for demolition by the LGU.

The implementation of these activities took it from the efforts of task forces established to rehabilitate prime tourist destinations in the country, such as Boracay and Manila Bay; and El Nido, Coron, Puerto Princesa and San Vicente in Palawan, and Puerto Galera in Oriental Mindoro, all of which are located in MIMAROPA Region. These activities shall likewise form part of the job of newly created Task Force for Occidental Mindoro headed by OIC- PENRO Ernesto Tanada. The Task Force would spearhead rehabilitation of problematic areas in San Jose.

“Definitely, many residents and business owners will be affected. But we do hope that they will fully understand that we are doing this to restore what has been damaged; to help them realize that they are also stewards of nature, and eventually for all of us to enjoy the blessings of nature, and bequeath to future generations, a healthy and clean environment,” RED Adornado noted.

“During the workshop, we have seen representatives from various sectors in the community who are more than willing to take active part in cleaning Mangarin Bay and Pandurucan River,”Assistant Regional Director Vicente Tuddao, Jr., the workshop facilitator, said.

“With that, we are positive that we have already hit the ground running to restore the town’s problematic areas. We look forward to seeing the municipality of San Jose as one of the country’s cleanest and best island destinations,” he concluded. (Photos from CENRO San Jose) ###